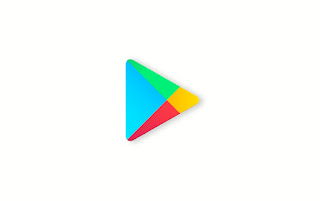 How’s it going guys, today I’m going to show you the new redesign of the Google Play Store and show you how to get it on your phone. However, it’s no guarantee that my method will work since this is a server update, and Google keeps on enabling and disabling it with every new update of the app. So first, let me show you what this update consists of.

The overall theme is now white, it used to be a combination of colors depending on the category you were in. So for apps or games, the banner would be green, movies would be read, books would be blue, and music would be orange. Now all those tiles have been moved to the bottom for easier access. And no matter what pager in the background is always white. However, the icon still animates to the appropriate color. I know what you’re thinking, why is there no dark theme within this app yet? I honestly don’t know. I’m hoping by the time Google releases the pixel 4 we’ll begin to see a dark theme within the Play Store. Especially continue that almost every other Google app has a dark mode option and the system dark theme within Android Q is a lot better now. But don’t quote me on that. For now. It will continue to use substratum if you have that option. 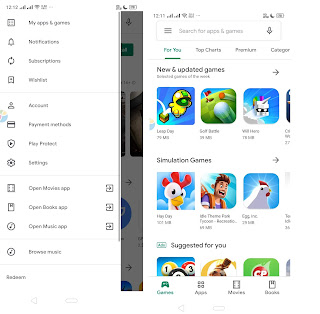 At the top, you still have the sub-tabs for things like top charts, categories, Editor’s Choice, early access, etc. And the search bar has been updated with rounded corners, new text, and an outline microphone icon. The slideout menu to the left is still pretty much the same. Just the icons have an outline design and the only new options the Browse music. A new thing that I’ve noticed is that when you want to search for something you no longer getting dropped down menu. Instead, you get a full-fledged page as another only shows you the search history. But I’m hoping that once Google starts rolling out this update to everyone, This page will show you my results of the things that you typed in. 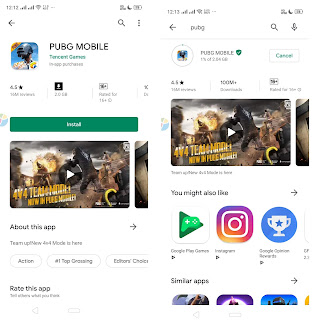 Within an Apps page, there are a ton of objects that have been moved around and change the ratings and number of downloads are above the install button. The category bubbles have been pushed down towards the bottom near the description. The install button is now a lot wider and fills the entire screen unless there’s a try now button. And when you tap on it, the progress bar is now shown around the Apps icon which looks a lot better in my opinion for the description and now reads about this app instead of reading more. And the screenshots and trailers are now rounded and have a shadow effect.


That’s basically all the changes that Google has made for the Play Store. It’s more of a redesign update. Since this hasn’t been pushed out to every phone yet, there’s still a possibility that Google may change or add a new feature in the coming weeks. But from the looks of it, changes that I just said to you are set in place.

if you’re interested now for the installation process. This is a hit or miss situation. This method was working for me a few days ago. And then it stopped working. And then a few days after that, it started to work again. for when I went to write this article the very next day it stopped working. But maybe in a few days after I publish this article, it’ll work again. So I’ll just show you the process anyways. First, you’re going to tap on the APK mirror link at the end of the article. And once you’re on the website, look for the latest Play Store version. Then make sure you select the variant that has zero in the title because that option supports every Android phone, download the SDK, install it, and it should install without a problem. From there, you still won’t have a new look. So we’re going to need to clear the app’s data. So go into the apps info page, tap on storage and clear storage from there restart your phone and once you boot up you may or may not see the new update. , if it doesn’t work then come back a few hours later and try this method again.