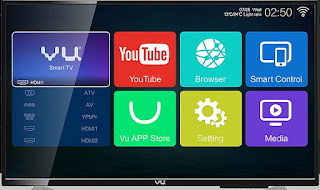 Credit:-vutvs.com
Xiaomi, who is making a comeback in the domestic TV market, has launched a new tide in the domestic market by releasing Mi TV 4A Smart TV at a budget price tag. The smartphone market also made the record for the smart TV market. But Vu company is releasing a new smart TV to compete with Xiaomi.

Television, which launches a new wave in the market, will launch the first Android TV on March 13. And it will be sold in Flipkart as Exclusive.

In addition, Vu Television is already offering TVs at the lowest price. The new smart TV is expected to be offered in a different version and will also be offered at budgetary prices.

It is said that the new technology will be used to reach most people in the Veu Television Market. So there is a lot of demand in the market.
Loading...